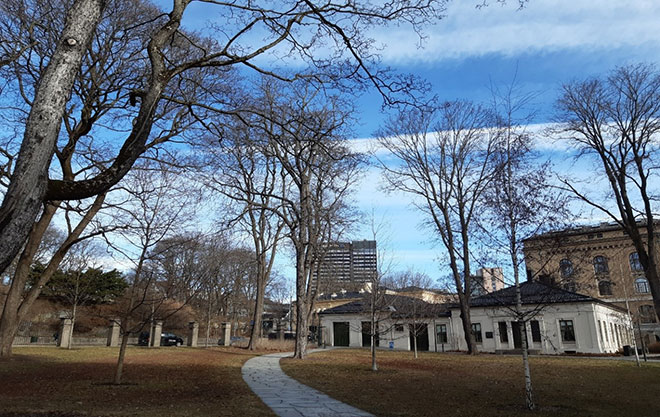 Held at the University of Oslo on March 29th, the InnovEd4TS project gathered 35 professors, peer experts, project leaders and guest participants to a hybrid seminar. Over the last two years, through virtual field missions, the project has been focusing on the development of students’ transferable skills in Higher Education. The seminar was the opportunity for the group to make recommendations and explore the possibilities for upscaling and disseminating the flagship initiatives presented in the first phase of the project.

The participants divided into three smaller groups according to their main didactical focus. As not all the participants took part in all of the field missions, they were briefly (re)introduced to the flagship initiatives presented during the field missions. In the groups, they had the opportunity to familiarize themselves with the innovative pedagogies, discuss and brainstorm on how they could expand the initiatives to a european level either within Circle U. or among the Strategic Partnership member institutions. Across all the groups, some common challenges were identified. The participants felt that, in order to accelerate curricular innovation, it is necessary to consider and address notably the didactical training of academic staff, recognition of teaching in career development, teacher engagement and assessments.

Among the ideas that came out of the workshops were the creation of a Circle U. label for innovative pedagogies and a strategy or policy framework for the promotion of joint and innovative education in the Think and Do Tank. In reflecting on the shared strengths of the flagship initiatives, it was felt that Circle U. could do more to tap into its students as a source for curricular innovation and enhance student involvement through more co-created initiatives and participative pedagogy.

Reflecting on the role transferable skills played in the nine flagship initiatives, the participants felt that, while they were rightly proud of their innovative pedagogies, transferable skills were often relegated to the role of “hidden treasures” in the flagship programmes. In looking for ways to make the development of transferable skills a more explicit and visible part of the curriculum, it was suggested that a “flipped” version of the InnovEd4TS Transferable Skills Booklet could be designed. While the current booklet (pdf) asks teaching staff to identify the transferable skills taught and developed in their projects, a “flipped” version would allow students to assess their own level of skill in each area and identify their own developmental needs and interests, thus allowing tutors and teaching staff to align their activities and support accordingly.

For some of the flagship initiatives, concrete ideas were proposed as to how to take them further and expand them. For example, it was felt that the “Big Books” (Key Texts) initiative implemented at Lisbon could easily be translated into an online student experience in the form of a MOOC open to all the Circle U. partners to be used as a flipped course. Similarly, Oslo’s “Coding for Science Education” initiative could easily be expanded beyond the natural and life sciences, as coding is rapidly becoming a key skill not just in the labour market, but also in research methods training in social sciences, arts and humanities. Finally, it was felt that the development joint didactical training programmes might help to promote innovative pedagogy around the alliance.

One issue discussed at the seminar was the question of multiligualism and language competency. While InnovEd4TS looked at “Intercultural understanding” as a key competency, the project did not look at the crucial role foreign language competency and multilingualism play in teaching and learning in a European university. The discussion made clear that “internationalisation” in the context of a European university means more than “courses taught in English”. The participants higlighted the potential of students taking online-classes in their main subject in a foreign language in preparation for a semester abroad. They also discussed the potential of teaching in bilingual formats, as for example the French-German university. Technological advances in voice recognition technology and automatic subtitling might help to reduce barriers to participation and encourage language learning in university. It was also pointed out that large numbers of our students speak a second or third language (e.g. Turkish, Arabic, Russian or Chinese), but rarely get opportunities to use or develop these in a European academic context.

During the workshops, the groups came up with several recommendations focused around activites led by the alliance, such as a Circle U. day celebration to present and highlight the innovations. In addition, locally the “Circle U. Day” virtually could be also put in place to present the activities.

The Circle U. Challenge that is already organized within the Alliance could also be used as a format to experiment new pedagogies to develop student’s transferable skills.

The initiatives undertaken through the InnovEd4TS project will play an important part in the future developments of the Circle U. Think & Do Tank. One of the key objectives of the Think & Do Tank is to focus on pedagogical innovation with specific attention to sustainable education and multilingualism. The Think & Do Tank will carry over some of the work already started by InnovEd4TS. It should become an arena for developing experimentations in transferable skills as well as a forum for bringing together innovative professors around the alliance.

Looking ahead: Sharing the recommendations

Within the framework of the project, the members will collectively work on a co-authored recommendations report to be delivered over the coming months.. The project members are preparing for a national conference to be hosted by Université Paris Cité in the fall. The report will be shared at that time.

Launched in 2019, InnovEd4TS is a European project funded by the key action "Erasmus+ Strategic Partnership". As a stepping stone in the founding of the Circle U. European University alliance, the strategic partnership brings together five members of Circle U, Humboldt, UCLouvain, Oslo, Aarhus and Paris in along with the University of Lisbon.